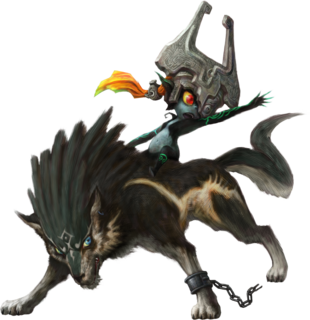 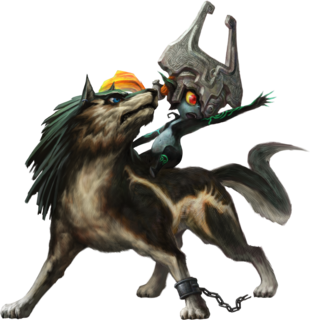 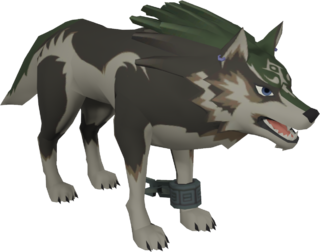 In Twilight Princess, Wolf Link is the divine beast that Midna explains the Twili have long believed would free them.[5] Link is transformed into this form due to the influence of the Twilight covering Hyrule.[6] His whole body changes and reforms, leaving only his earrings, his distinctive blue eyes, and the Triforce mark on his hand. Though losing the ability to use items, this new form grants Link heightened senses and speed, along with many other unique abilities.[7] In this form, Midna rides on Link's back giving directions, and allows him to warp using the Portals created across Hyrule.

Link is first transformed into a wolf following the appearance of Bulblins at Ordon Spring. Colin and Ilia are carried off, and Link is left lying unconscious in the spring. When he wakes up, Link runs in pursuit of his kidnapped friends, but finds a Curtain of Twilight blocking his path. Suddenly, the massive arm of a Shadow Beast springs from the Twilight, dragging Link inside. As the Shadow Beast clutches Link around the neck, the mark of the Triforce suddenly appears on the back of his hand and bursts forth pure light, driving the creature back. Link falls to his hands and knees and morphs from human to wolf, causing him to pass out from the strain of the transformation. He is then dragged off by the Shadow Beasts and imprisoned within the Hyrule Castle Sewers, where he meets Midna, who helps him make his escape.

It is later revealed that anyone engulfed in the Twilight will normally be transformed into a helpless spirit, and that only the power of the Triforce protects Link and enables him to retain his physical form, although considerably altered.[8][9] Link is eventually able to return to his human form with the aid of the Light Spirit Faron.[10] Upon entering the other provinces of Hyrule covered in Twilight, Link is again transformed into his wolf form, and can only regain his human form after aiding the Spirits of Light by restoring light to the area.

When Link finds the Master Sword and receives the Shadow Crystal, he is able to change at will by exposing himself to the power of Twilight contained within the crystal by simply talking to Midna.[11] 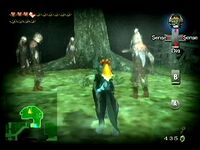 One of the most important aspects of Link's wolf transformation is that he gains the use of greatly enhanced senses. This ability, shown as Sense while in wolf form, activates a special combination of enhanced visual and olfactory perception. Visual range is reduced, but Link is able to detect many otherwise hidden things. The Sense ability is notably similar to the power of the Lens of Truth from previous titles, though it can be used indefinitely and does not take up Magic Power.

Wolf Link's enhanced Senses have a number of vital applications throughout the game. The first use, taught by Midna while in Hyrule Castle Sewers,[12] is to detect the spirit forms of the people of Hyrule trapped within the Twilight. Appearing as a floating greenish flame, these spirits' true form can be seen by activating the Sense, enabling Link to listen to their thoughts. As Link is unable to communicate directly with the spirits, this enables him to gain useful information from them about recent events. Also, Link needs to use the Senses to see and defeat certain enemies, such as Ghoul Rats and Poes.

Another application of the Sense ability is the detection of special patches of ground found all across Hyrule. These appear as patches of sparkling light where Wolf Link can dig, usually unearthing items such as Rupees or Hearts. Some of the patches are larger, and can lead to different areas within dungeons, or to caves. This digging ability is always available to Link while in wolf form, but is mostly useless unless combined with the Sense ability.

An important use of Wolf Link's enhanced Senses is the detection of special Scents encountered during his quest. Upon encountering particular items, Link is able to remember the Scent, which appears as a colored trail while the Sense ability is active. This tracking ability is vital at many points in order to progress though the game. When a new Scent is encountered, the previous scent will be forgotten. Wolf Link can learn a total of six different Scents throughout the game, which can be of enemies or characters.

While mounted on Wolf Link's back, Midna can use her powers to help Link in a number of ways. In certain situations, she is able to transform her hair into a giant, orange or pink hand. In the Hyrule Castle Sewers, she will use this arm to draw Link's attention to chains which must be pulled to open grates, raising and lowering the water levels. During the battle with Ganon, Midna is able to grapple the enormous beast to the ground as he charges, allowing Link to attack. She also uses this arm to open dungeon doors for Wolf Link.

Another ability is the Dark Energy Attack, where Midna raises her hand and summons a growing circle of crackling Twilight energy which will surround any enemies within range. Once released, this power allows Wolf Link to unleash multiple attacks, rapidly darting from one enemy to another, defeating them all simultaneously. This technique is vital to defeat the groups of Shadow Beasts which appear from the Portals across Hyrule. It is also very useful in defeating large groups of enemies.

Midna is also able to warp Wolf Link to any of the Twilight Portals across Hyrule. This ability can also be used to transport different objects throughout Hyrule, such as bridges.

In accordance with Link's new Wolf form, the nature of his attacks in this form is also different. The standard Bite Attack is performed in the same way as a Sword slice and has a similar effect. The Jump Attack is also performed similarly to when in human form, however, against certain enemies, Wolf Link can repeatedly bite at an enemy's jugular by repeated button presses. Also available is the Spin Attack, again performed in the same manner as in human form. Once completed, Wolf Link's tail will glint in the same manner as Link's Sword, indicating that the Spin Attack can be used again.

Wolf Link also possesses a number of other miscellaneous special abilities. While running, he is able to dash; pressing the A button will allow him to briefly run more quickly.

In various locations across Hyrule, Link will encounter tightropes which must be crossed to reach other areas. Wolf Link is able to rope walk by balancing carefully and walking slowly across.

In other specific areas without ropes, Link is able to use a long-distance jump. These areas are indicated by Midna, who will then float across to show Link where to find his next foothold. This can extend into a chain of up to a dozen jumps which must be performed in rapid succession in order to reach the other side, sometimes avoiding enemies or falling objects.

Another useful ability is that of communicating with animals. In wolf form, Link is able to understand and speak to all types of animals found across Hyrule, including Epona. He will be able to glean useful information and hints from them.

Being a wolf, Link in his transformed state is able to howl, which can again be done is specific locations. Patches of Hawk Grass and Horseshoe Grass can be used to howl the tune normally played, summoning a Hawk and Epona respectively. More importantly, special Howling Stones can be used to summon the Golden Wolf, enabling Link to learn the seven Hidden Skills.

Wolf Link and Link in Hyrule

In Breath of the Wild, Wolf Link appears as Link's traveling companion when the Wolf Link amiibo is tapped in via the amiibo Rune.

Wolf Link will follow Link wherever he goes, attack enemies and Animals on sight, and, if the Sheikah Sensor is on, will find the nearest object that the sensor is set to locate. If Link travels too far out of Wolf Link's reach, he will warp to Link's side. When Link stands beside Wolf Link, he can command him to "Stay" by pressing the A Button. The Remote Bomb Rune will deal three Hearts of damage to Wolf Link if he is caught within its blast radius.

Wolf Link's number of Hearts depends on the amiibo's registration with Twilight Princess HD. If the amiibo is unregistered, Wolf Link will have 3 hearts. If registered via the Cave of Shadows, his Hearts will depend on the Hearts that remain while finishing the dungeon.

Wolf Link can be summoned indefinitely as long as he still has Hearts remaining. Once he is defeated, he will not appear from scanning the amiibo until the next real-world day. When out of combat, Wolf Link will eat nearby health-recovering items to recover hearts if he needs to. Wolf Link cannot be summoned in towns or dungeons and will not follow Link to these locations. Wolf Link is a visitor from a separate plane of existence and consequently cannot be seen by normal people.[14]

In Super Smash Bros. Brawl, Wolf Link appears as a Trophy and a Sticker.

Super Smash Bros. for Wii U

Wolf Link appears as a Trophy in Super Smash Bros. for Wii U.

W. Link was added as a villager in the Welcome amiibo update of Animal Crossing: New Leaf, alongside Epona, Ganon, and Medli. If the Link, Wolf Link, or Princess Zelda amiibo is scanned into the game, W. Link will show up at the campground and can be asked to move into the town. He is a Wolf villager that has a Smug personality, and thus has high self-esteem and values his friendships. His birthday, December 2, references the Japanese release date of Twilight Princess.