Not to be confused with Malo, a similarly named character from Twilight Princess. 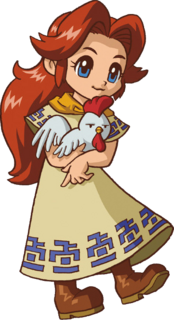 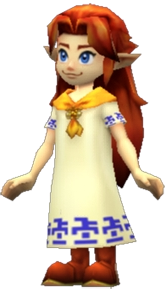 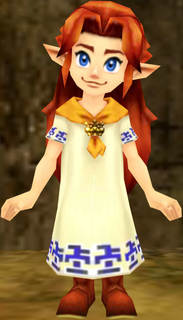 Malon is a recurring character in The Legend of Zelda series.[3] In the majority of games she has appeared in, she is the daughter of the rancher Talon, who owns Lon Lon Ranch.[4][5] Portrayed as a kind-hearted and responsible girl, Malon is often seen taking care of Epona, one of the Ranch's Horses. She also enjoys singing, specifically "Epona's Song".

In Ocarina of Time, Malon is a young girl who loves to sing outside Hyrule Castle's walls at night. She, along with Ingo, takes care of most of the duties at Lon Lon Ranch due to her father's laziness. Link first meets Malon, who calls him "Fairy Boy", in the Market where she is looking for her father, Talon.[6] Link finds Talon asleep outside Hyrule Castle and wakes him up using the Cucco that hatched from the Weird Egg Malon gave him.[7] After this, Talon returns to the Ranch and reunites with Malon.[8] When Link visits Malon at the Ranch, she introduces him to a young Horse named Epona,[9] and teaches the young hero "Epona's Song", a song her mother composed.[10]

When Link returns to Lon Lon Ranch seven years later, he discovers that Ingo exiled Talon and took over the Ranch. Malon has been working for Ingo out of fear of the Ranch's Horses facing abuse from him if she disobeys his orders.[11] Moreover, since Ingo was struggling to tame Epona, he was planning to give her as a present to Ganondorf, though Malon was the only one who could tame her.[12] Malon tells Link that she recognized him but was not sure who he was until he told her his name.[13]

As a minigame, Malon lets him race around Lon Lon Ranch to compete against her best time.[14] When he is able to beat her time, she rewards him by sending a Cow to his House in Kokiri Forest, which may be used as a free source of Milk. Should Link best his own time afterwards, Malon will simply compliment his and Epona's teamwork.[15]

With the Mask of Truth, Link can learn from the Gossip Stones that Malon dreams for a knight to take her away.[1] A Gossip Stone in front of the Temple of Time also says that Malon was the original record holder of the Lon Lon Ranch obstacle course,[16] her record being 50 seconds.

Ocarina of Time is the only game in which Malon's mother is mentioned. She is not present by the time of the events of Ocarina of Time, but it is clear she had a great influence on Malon and the others on the Ranch. She was the one who composed "Epona's Song", which is said to be liked by everyone on the farm.[10][17] If Link speaks to Talon while wearing the Gerudo Mask or the Goron Mask, he says that it reminds him of his wife, but he quickly retracts that statement.[18]

Malon plays a small role in the Trading Game for Oracle of Seasons. She lives with her father Talon north of Horon Village, where the two raise Cuccos. When Link first meets her, Talon has gone to climb Mt. Cucco and has left Malon to raise the Cuccos by herself; however, she confesses to the young hero that she does not know much about the hens.[19] Link can help her by giving her the Cuccodex, an information database of Cuccos, in exchange for a Lon Lon Egg.[20]

In Four Swords Adventures, Malon appears on The Field stage. Upon arriving, the Links encounter Malon standing by herself. She tells them that she was running errands, but just as she was about to head back to her home, it started raining; furthermore, the Soldiers were moving all the Cannons.[21] Helpless, Malon asks the four Links if she can accompany them until she gets back to Lon Lon Ranch with her father, Talon.[22] During their travel, Malon can be killed by the Castle guards, as she has only one Heart Container. Once the Links return her safely to the ranch, she admits that at first she was not sure she could count on them, but soon realized her mistake and acknowledges the Links as real heroes.[23]

Malon and her father Talon both operate Lon Lon Ranch east of Hyrule Town in The Minish Cap.[24]

Link first encounters Malon after speaking with the Town Minish in Rem's Shoe Store. She and Talon are locked out of their House.[25][26] Link helps them by shrinking to Minish size and going into their House to find the Spare Key, which is inside a Jar. This gives him access to Lake Hylia and the northern portion of Minish Woods, where Syrup the Witch's Hut is located.[27]

Afterwards, Malon can be found in Hyrule Town selling Lon Lon Milk for 100 Rupees alongside Epona.[28] She is one of the potential characters to have a random Kinstone Fusion available.[29]

Whenever Link speaks to Malon, a brief portion of "Epona's Song" plays.

Malon is first seen at a young age, after Link has played Saria's Ocarina, which attracts Epona. The two ride off, just as Malon is calling for the missing steed.[30] After retrieving the Goron's Ruby with aid from Epona, Link readies himself to search for the final Spiritual Stone, but is delayed by the sound of singing, which he finds curious since it's late at night.[31] Malon startles Link as he pets Epona, but exclaims her excitement at finally having a visitor.[32] She gives Link a tour of Lonlon Ranch, introducing her father Talon and their ranch hand, Ingo. She becomes upset at her father snoozing with company present,[33] but laughs and responds positively to Ingo's comment on her father's laziness.[34] Eventually, Malon introduces herself, and tells of Epona's love for music.[35] She then teaches Link "Epona's Song".[36] Link asks Malon where her mother is, [37] revealing that she died when Malon was little.[38] She says how singing at night makes her feel better,[39] which Link relates to with his Ocarina.[40] Malon talks about her dream, where a prince comes to carry her away.[41] She then asks Link about his dream,[42] although not too long later, an owl, Kaepora Gaebora, arrives. The owl explains to Link where the Spiritual Stone of Water is, so Link departs with him to Zora's Domain. Link promises Malon he will return,[43] with Malon herself saying that he should hold true to his promise.[44]

Malon is not seen again until part two of Ocarina of Time manga. An adult Malon has become a prisoner of Ingo, who was brainwashed by Twinrova to lure Link in order to defeat him. As Ingo whips Lonlon Ranch's horses, Malon asks him to stop,[45] where he replies that she is no longer the Ranch's mistress, ordering her to obey him.[46] She asks him why she is tied up,[47] revealing the brainwashed man's plan to draw "him" out,[48] but Malon doesn't realize the man Ingo speaks of is Link.[49] Link spots Malon through the stable window, but is urged by Navi to go quietly, since Malon's captor may still be present.[50] Malon begins to shed tears, lamenting her poor life, but still holds onto the belief that a prince will one day save her.[51] Unexpectedly, Link falls in front of Malon. At first she doesn't recognize him,[52] until he plays "Epona's Song" on the Ocarina of Time.[53] Malon then becomes excited, asking why he is there,[54] but loses interest once Link explains he has come to rescue her. [55] She claims to be waiting for a prince, not a fairy child.[56] Despite this, Link grabs her by the arm and dashes away. Before they can escape, Ingo and a band of Gerudo block their exit. Malon is amazed at how Link has grown up, watching him defeat the Gerudo warriors.[57] She even goes as far to wonder if Link is indeed the prince she has been waiting for.[58] As Link and Malon try to figure out why Ingo is acting the way he is, Sheik arrives. When Sheik passes on a rumor of Princess Zelda being at the Haunted Wastelands, Malon notices Link's concern, and that he refers to her simply as Zelda instead of her full title.[59] Malon becomes saddened, as she realizes her romance towards Link is hopeless.[60] Grabbing a pitchfork, she then fights alongside Link to regain control of Lonlon Ranch. Once Link has undone Ingo's brainwashing, Malon and the men mount Epona and escape Lonlon Ranch until the Gerudo leave.

Malon is last seen bidding farewell to Link and Epona with her father and Ingo at the ranch. She finally calls Link a "Hero" instead of "Fairy Child",[61] promising to keep a Cow just for him if he ever needs Milk.[62]

In Super Smash Bros. for Nintendo 3DS, adult Malon appears as a Trophy.

Malon appears in Swapdoodle as a Doodle Lesson in the second Ocarina of Time DLC expansion.

In an Ocarina of Time developer's interview posted on Shigesato Itoi's website, 1101.com, script writer Toru Osawa said that Talon and Malon from Ocarina of Time are based on Tarin and Marin from Link's Awakening, and it is intended that players who have played the previous game will recognize the reference.[63]

In the same interview, Shigeru Miyamoto said that Malon being a songstress is inspired by his love of country music, including people like Emmylou Harris.[64]