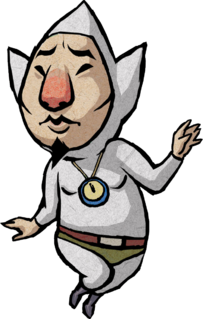 David Jr. is a recurring character in The Legend of Zelda series.[2]

In The Wind Waker, David Jr. stays at the top of Tingle Tower, where he works with Ankle. Despite this, he is not actually related to the Tingle Siblings?.[3] According to him, he was originally a sailor who sailed the sea aimlessly, and ended up on Tingle Island after being shipwrecked by a storm one night.[4] However, according to his Figurine, he was in search of the Ghost Ship's treasure which his father had found, and ended up at Tingle Island after feeling seasick. He awoke wearing his current uniform, which he hates, and was forced to work for Tingle.[5] He looks very similar to Tingle, except he wears white, and he does not have rosy patches on his cheeks.

David Jr. appears in The Minish Cap at Lake Hylia, by the water south of Stockwell's House. When spoken to, David Jr. offers to Fuse Kinstone Pieces with Link after recognizing him as "Mr. Fairy."[6] When Link successfully Fuses Kinstone Pieces with him,[7] the southeastern Tree in the group of four Trees in North Hyrule Field will open, revealing a chamber with a Switch connected to a Torchlight and a Chest with 200 Mysterious Shells. David Jr. will also express surprise that they managed to a successful Kinstone Fusion, claiming to not expect it to work.[8] If Link Fuses Kinstone Pieces with all four of the Tingle Siblings?, the final Switch will cause a Ladder to descend, allowing Link to open a Chest containing the Magical Boomerang.

David Jr. will acknowledge that he is not related to Tingle or his brothers, and questions why he helps them.[9] When spoken to afterwards, David Jr. will tell Link how many Kinstone Pieces he has left to Fuse.[10] He, along with the rest of the Tingle Siblings?, believes that Fusing Kinstone Pieces will help him meet Fairies.[11]