This article or section does not sufficiently cite its sources.
Please help improve this article by introducing appropriate citations. 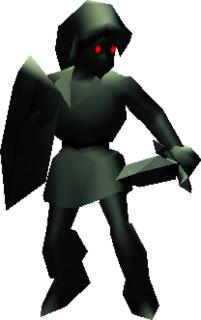 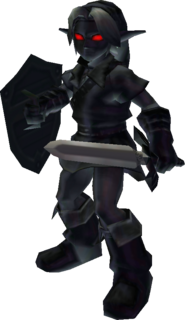 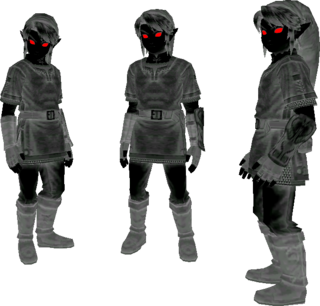 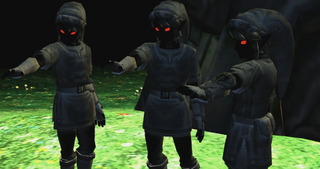 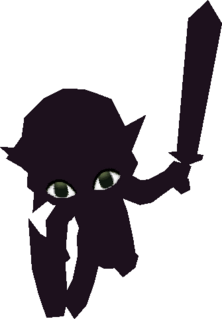 Dark Link is the evil reflection of Link.[1] He is one of the most enigmatic enemy characters in the The Legend of Zelda series, usually appearing with no backstory and no dialogue, although it is implied on numerous occasions to be merely constructed of shadow magic. Dark Link is more than just a mere battle against a monster for Link, but a battle against himself, as the young hero has to face his own strength turned against him.[2] Because of this, Dark Link is often the ultimate challenge. He is faced either as the final boss of optional challenges such as the Palace of the Four Sword and Take 'Em All On! in A Link to the Past and Spirit Tracks, respectively.

As Link's doppelgänger, Dark Link bears a resemblance to the Link of whichever game he appears in. He wears the same clothing as Link: a tunic and a long, floppy cap, though the similarities to Link end there. His entire outfit is black or dark gray instead of green. Moreover, his hair is usually either a shadowy black or a dark gray. Dark Link tends to be left-handed like Link. However, in some appearances (particularly when multiple copies of him appear), he has been shown to be ambidextrous. Another notable feature is his red eyes, which are usually the only prominent feature against his dark visage.

In the Game Boy Advance remake of A Link to the Past, after completing both the main story of A Link to the Past and the multiplayer Four Swords game, the Palace of the Four Sword is unlocked. The Dungeon Master is four Dark Links, each with a unique tunic, corresponding to the colors of the Links that hold the Four Sword. Reaching the final room of the dungeon causes the four different colored Four Swords to rise into the air, and following this the Dark Links will drop from above. Each Dark Link has slightly different abilities, but they all aggressively attack with sword swipes and do not open their defenses often. They are quite agile, able to leap backwards out of the way of Link's attacks. They are fought one at a time, and they get progressively more difficult. The green Dark Link uses the Pegasus Boots to suddenly dash at Link; the red Dark Link uses the Hurricane Spin and the Pegasus Boots. The blue Dark Link also uses Pegasus Boots and the Hurricane Spin, and he can leap into the air to perform a Down Thrust (this is also similar to Link's use of the Quake Medallion). The purple Dark Link is the final Dark Link, and utilizes the Pegasus Boots, Hurricane Spin, Down Thrust, and the Sword Beam. Defeating each Dark Link will break the curse on the Four Sword and return it to normal. 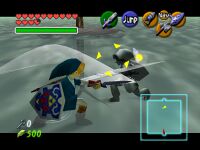 In Ocarina of Time, Dark Link appears as a Sub-Boss in the Water Temple, where he materializes from Link's reflection in the water to confront his good counterpart. Dark Link reacts to most of Link's movements and attacks, usually defending himself in the process.[3] Dark Link has the same amount of health as Link; the number of Heart Containers the hero has equals the number of hits with the Master Sword it takes to defeat his doppelgänger. When hit, Dark Link will fall through the floor and spring back up afterwards, from behind. At the beginning of the battle, Dark Link is nearly transparent, but will gradually become opaque as the battle progresses. When he is fully opaque, he will become more aggressive and actively attack Link instead of simply reacting to his moves.

There are a variety of strategies for defeating Dark Link. Link can use the Megaton Hammer, Deku Nuts, Biggoron Sword, or use his sword while L/Z targeting him and performing a horizontal slash on the opposite side of his shield, which gives Link an instant hit. Stocking up on magic Potions and using Din's Fire is another option that makes the fight against Dark Link very easy. Din's Fire is one of the best options in both the passive and aggressive part of the battle, as it will cause damage every time, provided that Dark Link is in range. If Link performs a sword thrust, Dark Link will simply hop onto the blade of the sword (before attacking if aggressive). Once Dark Link is defeated, Link becomes able to enter a room containing the Longshot.[3]

Dark Link shares Link's voice, but it is slowed down and distorted, giving it a demonic feel.

During the second phase of the final battle, Veran creates four clones of Dark Link that mimic Link's movement in reverse and act as dangerous obstacles. Unlike other appearances of Dark Link, these clones do not attack, and are useful in recovering health, as they are easily destroyed and drop one Heart each. They are similar in behavior to Arm-Mimics and Mask-Mimics.

Dark Link appears as the final challenge of the Take 'Em All On! mini-game in Castle Town. In this appearance, he attacks using a blade as dark as himself, that subsequently leaves a fitting black trail, and he can also place bombs and shoot arrows. He can also perform a jump attack like Link, only his is higher and much slower. Dark Link also mimics Link's sword attacks when he himself is not attacking, so Link must block his attacks and then counterattack. The music played when fighting him is the same as the track used when Link chased the Ghost Ship during the final boss's second phase in Phantom Hourglass. Conversely to his appearance in Ocarina of Time, he slowly fades from a pure black to a translucent gray as he takes damage, and once defeated, he falls over on his back and disappears, his eyes eerily left open during the whole animation. The room he is fought in is the only one which contains Hearts, despite Joynas's earlier warning that there is no way to recover health in the challenge rooms.[4]

In Breath of the Wild, the Dark Series is an Armor Set that gives Link the appearance of Dark Link, as he appeared in Ocarina of Time. Wearing the full Set grants Link the Night Speed Up Set Bonus. 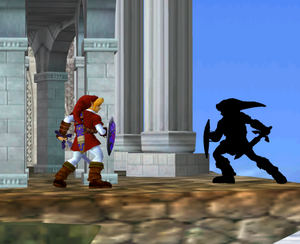 Dark Link, as he appears in The Adventure of Link and Ocarina of Time appears in the Event Match "Link's Adventure", where he must be defeated with Link on the Hyrule Temple stage. 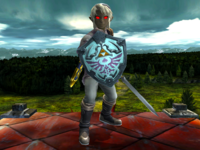 Dark Link, as an alternate costume for Link, in Super Smash Bros. Brawl

Both Link and Toon Link are able to take on the appearance of Dark Link as an alternate costume in Super Smash Bros. Brawl. This version mostly resembles the one featured in the Twilight Princess cutscene.

Super Smash Bros. Melee's version of Dark Link (which in turn is based on the Dark Link from The Adventure of Link and Ocarina of Time, with a completely black appearance) reappears in the event match "Dark Link Duel" on the Bridge of Eldin stage. Unlike the alternate costume, the Dark Link in this event is completely black, as opposed to Link's alternate costume, which is mostly gray and black with red eyes. As in Super Smash Bros. Melee, Link is the only option to fight against Dark Link. However, unlike Super Smash Bros. Melee, this battle is fought as a Stamina match, making him more like a traditional The Legend of Zelda enemy. A similar event, known as Battle of the Dark Sides, is featured for two players, in which Dark Link is fought by Link and Samus together, but is similarly accompanied by Dark Samus, an entity that, like Dark Link, is completely black, instead of resembling the canon Metroid character of the same name.

In the Ocarina of Time manga by Akira Himekawa, Link meets up with his shadowed doppelganger at Kakariko Village. From Beneath the Well, Dark Link emerges, ready to defeat the original Link. The original Link managed to defeat his dark self by learning that the shadow monster is only as good as Link was then. So to defeat him, Link had to become better than he was before. Slicing Dark Link in half, the dark hero was not yet done. Dark Link then returned riding on a Dark Epona. Link countered and defeated Dark Link once again with the use of his own Epona. This Dark Link replaced Bongo Bongo as boss, most likely because the Shadow Temple didn't appear in the manga.

In Hyrule Warriors, Dark Link appears as a mini-boss in the "A War of Spirit" Scenario. He is summoned by Cia by channeling the darker side of Link's personality into physical form, appearing as a completely dark version of him with glowing red eyes. After the first one is defeated, several more copies are summoned which attack Link and the Hyrulean Forces. Link fights them all with the confidence that he can easily overcome them, but quickly becomes overwhelmed, and is saved by his allies who defeat and dispel the Dark Links.

In the Master Quest DLC pack, Dark Link appears again in the Cia's Tale Scenario, "Darkness Falls". When Cia's dark magic begins to steadily unhinge her mind, she begins summoning several Dark Links to defend herself from Ganondorf's Forces, under the delusion that Link will come to protect her. However, by the time Zelda's Forces reach her stronghold, the Dark Links appeared to have all been vanquished in battle.

In Hyrule Warriors Legends amd Hyrule Warriors: Definitive Edition, the Dark Links make one final appearance in the Wind Waker Scenario, "Reclaiming the Darkness". They are summoned forth by Dark Cia to capture the real Cia. However, they and Dark Cia are once more vanquished by Link and his allies.

Two of Cia's combo attacks with the Scepter involve summoning a circle of Dark Links around her to take out nearby enemies.

A Dark Link Costume is also available to use when playing as Link for players who buy the Hero of Hyrule DLC season pass, or by purchasing all of the packs included in it. The Costume will also turn Link's Weapons into the same color scheme; Epona and the Great Fairy will change color and have glowing red eyes. As Dark Link was spawned from Link's shadow, he himself does not cast one.

As in Breath of the Wild, Link can don the Dark Armor set to take on the guise of the Hero of Time's incarnation of Dark Link, though its pieces are obtained in separate challenge missions. The Dark Hood is obtained in Questionable Escort Mission, the Dark Trousers in Fire Hazards and the Dark Tunic in Unnatural Disaster. Unlike in Breath of the Wild, the costume is merely cosmetic and does not provide any bonuses when wearing the full set.

Bosses in The Legend of Zelda Series
hide ▲

Bosses in The Legend of Zelda

Bosses in The Adventure of Link

Bosses in A Link to the Past
Light World

Bosses in Ocarina of Time
Bosses

Bosses in Oracle of Seasons
Bosses

Bosses in Oracle of Ages
Bosses

Bosses in The Wind Waker
Bosses

Bosses in The Minish Cap
Bosses

Bosses in A Link Between Worlds
Bosses

Bosses in Breath of the Wild
Bosses