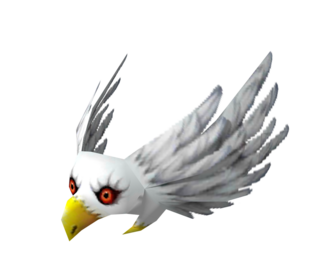 The Bremen Mask is an item in Majora's Mask.[1] It resembles the face of a bird.

That is the Bremen Mask, isn't it?

If you have that, then it would appear you have the qualities of a leader.

The Bremen Mask allows Link to play a marching melody, which makes domestic animals other than cows and horses follow Link, who leads them in a brisk march as he plays his Ocarina. The Bremen Mask can be used in the fight against the Ikana warriors to confuse them and make them march along with Link, rendering them vulnerable. It also makes Cucco chicks grow into adults, which is required to obtain the Bunny Hood.[4][5]

The mask appears to be named after a Grimm's Fairy Tale titled Town Musicians of Bremen, in which a group of animals decide to leave their masters and become traveling musicians.

The mask's Japanese name, ブレー面, is a pun. Most of the masks in Majora's Mask use the prefix お, denoting something as polite, and are thus called お面. The Bremen Mask however is referred to as ブレー面. ブレー or 無礼, meaning "rude," thus translating as "rude mask." This also makes a pun with ブレーメン, Japanese transcription of "Bremen."